I have 2 stories to tell you today about why never giving up pays off!!

My name is Michael Steele…I’m 62 years of age born in Toronto Canada and have lived the “A”, “B” and “C’s” of life 2 times…but nothing hurts more than when you live it through the influence of your closest family members and friends. These stories are about Thomas Sydney Steele, my father & myself.

Thomas Sydney Steele was born in 1922 on the east side of London into a very impoverished household in a time of deep despair and depression.

By age 7 Thomas had lost his 8-year-old sister to pneumonia, due to the poor living conditions in the basement flat in London followed by his mother had Abandoning him over the distress of loosing her only daughter and the extreme poverty in which my grandfather had only been able to provide for a life in Cockney London of the 1920’s.

After what can only be described as a harsh 10-year upbringing in London working as an ice delivery boy on the back of a horse-drawn carriage for my grandfather, by age 17 (1939) Thomas voluntarily enlisted himself into the British Marines in search of a better life…at 6’4″ tall and sporting a strong build from 10 years of lifting large ice blocks off a horse-drawn vehicle for my grand-father, Thomas quickly became trained and transferred into the elite a hand to hand combat “Green Barrett” special British forces.

By age 19 he had seen parts of the world he had never imagined through the sight scope of a gun barrel, in countries such as North Africa, Asia and then Burma- India.

By age 20 he had been shot and stabbed several times and ended up in an Indian hospital in 1942 in the slum city of Calcutta.

Thomas had been left to die on the Indian battlefields by the British military of what today is known as Bangladesh… In his eyes, this was now” Betrayal”.

After recovering in a slum Calcutta hospital in 1943 at the hand of Mother Teresa’s Missionary of Charity nurses, Thomas found his way back to England where he was then re-deployed into Europe on June 06, 1944 (D-Day)

Scared, and uncertain about his future Thomas managed to survive the European campaign and eventually with no home to return to in London left for Canada in 1945 12

Thomas with only a grade 4 education level and the $17 he claimed he had in his pocket when he arrived into Toronto Canada, found employment as a dishwasher and then ultimately settled into a career as a school janitor for the next 35 years while raising a family of 6 in Toronto. 13- Thomas never found the “C” element of closure to his anger, derived from the parental abandonment by his mother in 1929 and the feeling of betrayal from the British military later in 1942, which we as children witnessed many times growing up in the 1950’s and 1960’s in our household until he returned almost 30 years later to London to see his father, (my grandfather) for the first time since enlisting in the marines in 1939.

I recall clearly my father telling me when I travelled with him back to England to see my grandfather, that there will be many hurtful and dangerous things that could and likely will cross my path in life but that he hopes I never have to experience the “A, B, C’s” he experienced in his life….and that I should never give up “hope” no matter how often and how hard the A, B, C’s feel!

Thomas died far too young of cancer on his modest Canadian country retirement sheep farm he built by himself north of Toronto at age 65!

I truly never appreciated the invaluable advice and heartfelt massage this amazing father figure, Thomas was conveying to me @ age 13 when we travelled together back to London in 1970 to visit for the first and what would prove to be the only time with my grandfather.

Unfortunately, by age 48, it all came full circle for me as I experienced the “A, B + C’s” from my own 3 sisters as well as my business partners and close friends.

After the death of my father Thomas, my mother became ill with polycystic kidneys which ultimately took her life 15 years later.

My mother had shown me a handwritten codicil note left by my father Thomas saying that he was only prepared to leave all his children the same $17 each that he recalled many times to us he had in his pocket when he arrived in Toronto in 1945.

With that in mind, my mother had her will changed whereby she insisted I take over as the estate executor from my sisters to ensure that all of Thomas’s estate would go to charity and specifically to help the children of India where he once felt he had a home for the first time in his life back in 1942-43, courtesy of Mother Theresa’s Missionary of Faith.

I recall asking my mother why she made the decision to remove all my sisters and insert me into the thankless role of an estate executor that was clearly only going to provide $17 / sibling and create an immeasurable amount of ill will.

Her answer was …it was only you that was with your father (Thomas) in 1970 when he found “C”-, feeling of “C”-closure for all his anger, derived from Abonnement and Betrayal upon returning back to see his dying father (my grandfather) for the first time since enrolling as a 17-year-old British Marine in 1939.

The year following my mother’s death was nothing short of “trying and difficult” for many reasons.

By the good graces of my faith and belief in myself and commenced the healing and rebuilding process…2 years later 2009 I had found the strength to reinvent myself both professionally as well as spiritually.

The outright sale of all my parent’s estate/ assets was used to resolve any other family feuds and to establish then the Steele Family Foundation, which today after 10 years of philanthropic giving has built food shelters and after school programs in Toronto and with the good work of my new life partner Stacey, we have now opened our first school in India home to 250 students close to the place my father had been recovering from war injuries in 1942-43.

I was able to restart my business and now after 10 years have over 500 employees in both Canada and the USA.

Our SFF Steele Charity has donated over $1 million to date and the greatest compliment of a and the sense of “C”-closure for me has come from the countless anonymous donations we receive each year totalling over $750,000 from people whom we don’t even know but who believe and trust me for the good work we are doing for the less fortunate.

I have found a new love in my life and a new way to look forward to the future….) find closure every day now as I look back on the trials and struggles of my father Thomas a realize that despite the sense of Abonnement and Betrayal I have experienced in my life , it will never be hard as what others have to endure in the extreme poverty I witness through my worldly travels We are blessed and although it took me until nearly the age of 50 to truly understand what Thomas meant when he said…

“FEAR ” came knocking at the door….”FAITH” answered and nobody was there !! 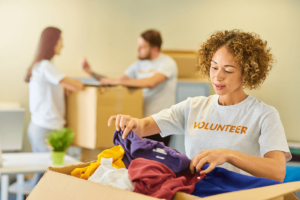 5 Ways You Can Help the Homeless in Your Community